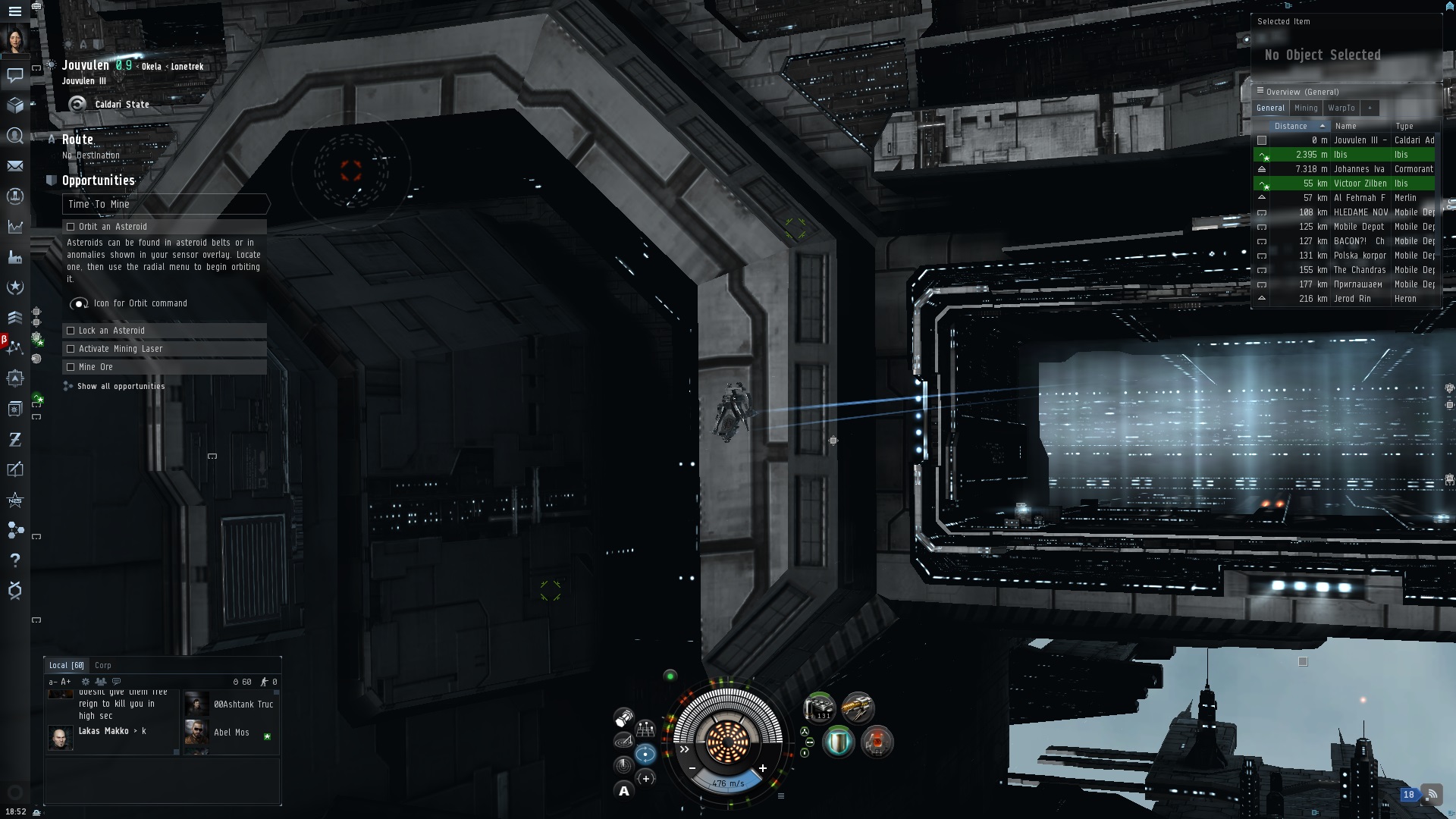 Oh boy. Yesterday i decided to split the evening in two- first, i wanted to take a look at EVE- for more reasons than the simple fact that there’s a war brewing and i have 10 days of subscription time for free. After that, i wanted to log into Elder Scrolls Online and get the anniversary cake for my two characters. But it never came to that; i lost myself in New Eden.

As strange as it may sound, the main culprit here is Black Desert Online. While i haven’t played much of the game, there are others out there thoroughly enjoying it. For good reasons, i might add. But with the short time i had, there was one thing i couldn’t shake down: with player-to-player interaction being basically limited to pvp, BDO is a game that seems to be very much playing alone together. This isn’t a problem at all, in many aspects. Exploration, for instance, is doing just fine, as is fighting mobs, fishing and other stuff. There is, of course, also the option to band together and go fishing by boat or something like that. BDO is exceptionally beautiful and it is a fantasy world- for me, that is much more interesting to explore and see than empty space.

The thing nagging me a bit? Economy and crafting. Trading is done with NPCs mostly, and while other players influence prices, in the end, you’re doing it alone and everything you trade goes into the void where it came from (which is good, mind you). I don’t know if there’s money to be had in crafting and trading in the market place. I’m not done with BDO by far, i’m very interested in seeing how the game develops and maybe, possibly i’m wrong in my assessment. But that doesn’t change the feelings i was having when playing the game.

In EVE, almost nothing is materialized from thin air- and everything breaks or gets used up, eventually. There’s a vast galaxy with 5000 star systems, if i remember correctly, and everywhere, on each and every station, there’s player trade. With regionally differing prices. And it’s this part that always makes me look at EVE and its players with a lot of envy. It’s this feature i’d like to see in Fantasy MMORPGs.

So with World War Bee going on, CCP did the smart thing and offered 10 days of subscription to lapsed accounts. The offer lasted until 04/03, and that was the day when i “reserved” it for me. To maybe take a look, again. I’ve been there countless of times:

Each of these times, especially when i went for a multi-month subscription, it was a waste. But i actually don’t really think it’s the game’s fault- yes, it seems to be quite “boring”, coming from MMOs where you interact more directly with your surroundings- EVE seems a bit like an MMORTS, it’s strategic, involves planning and a learning curve that really is not a joke. If you enjoy learning and mastering games, EVE is the place to go. Really.

I need to figure out what i want to do. That’s actually the hardest part- i’ll tell you the story of yesterday a bit later as it shows how things go for me with EVE. There’s a lot i’d like to do, and that’s even with consideration of my interest in mining, crafting and trading mentioned above. Even that is a too wide scope to concentrate on when being a noob, and can be expanded with things like planetary interaction. What i usually don’t like as much is doing quests- it’s not EVE’s strongest side, at least not for me, although there’s not much difference to many themepark MMOs.

Another problem i face is that i’ve never given the game much of a chance, really. I was annoyed that it would have me do tutorials- and many of them that take quite a lot of time and at the same time, i need those tutorials- if you skip them, you’re on your own with learning things in EVE. And also, there’s lots of free stuff from doing tutorials and missions. It felt linear, even if you could just take a break, do what you want and return later. So i’ve never played the game for longer stretches of time which lead to me having to relearn everything the next time i tried the game, putting me back into square one, facing the same problems again, leave, return, rinse&repeat. I even deleted characters!

Then, there’s a hesitation to join a player corp- while i feel they could teach me a lot and would provide the game with hooks, i also feel it might be jumping into the deeper end of the sea. Also, if i were to join someone, i’d need them to be nice people to be around and not space grumpies.

So as with Elder Scrolls Online, i feel like what’s really needed here is some dedication on my part. I’m not sure if i want to take a shot at that this time, but i do feel it might be worth it.

Yesterday evening was a prime example how things can go in that game. I logged in, put something in my learning queue and saw that i had the mining skill maxed. Nice, i thought, and went out to look for an asteroid field. They’re not difficult to find, so i was there in no time, shooting mining lasers at an asteroid from my tiny ship. Meanwhile, three lumps away, i saw how it could be done. See, in EVE, even mining can be a group activity. There were three miners and an industrial ship (i think, and maybe a fighter?)- the miners collected ore and when their cargo was filled, they’d transfer it to the industrial ship. My guess is that, at some point, they would return to some station and call their reprocessing guy. That’s mining and reprocessing for 6 players, mind you.

Reprocessing ore can be more profitable than selling it raw, but of course you can’t simply do it because you’ll lose some reprocessed ore. First, depending on your skill and how much the station charges you. Furthermore it’s based on the standing you enjoy with that particular NPC corp owning the station where you’d like to reprocess. So when i returned to the station, i saw that my yield was about 50% of what’s possible – for 1 concentrated Veldspar i could get 2 whatevers (instead of 4 with loss-free processing). The price was roughly at 33% – 1 Veldspar ore went for 18 ISK, 1 Whatever for 7.

As reprocessing would leave me with losses, i decided to simply sell the noob ore i mined- so i checked market prices from around the block. Four jumps away, the price was highest- in fact almost as high as it gets in Jita, the trading hub. So i went there. On my way, i did the math- selling everything would yield 50k ISK. That’s a laughably small amount of money. Still, i sold the ore and decided that, probably, i’ll need another ship for mining.

That’s the point in time when i published that Travel log yesterday and went into the depths of the internet to research some possibilities and most of all ships i could use for mining. So i found out that, actually, my ship isn’t that bad in terms of mining (i’m flying a Bantam) and that right now, because of skill, or lack thereof, i couldn’t fly anything that was better at doing this. Also, mining guides suggested to get at it in a group/fleet. So i researched solo mining and found the suggestion of trading instead of mining yourself. Nice, i thought, trading’s good, let’s take a look if i have some skills in this direction already. And went back into the game.

I wanted to assemble and jump into my industrial ship – it’s unbelievable how many ships this game throws at you in this early stage- i have 10 million ISK now but 6 ships already- fighters, mining vessels, industrials- but, again, lacked the skill. Then i looked into buying that skill but in the end i thought that, probably, some players would take advantage of newbies and sell skills for a ridiculous amount of money that can be gained through missions.

So, off to talk to agents. Only, in my current station, i already did everything the industrial and trade agents had for me. I remembered the agent finder then and looked for other agents nearby, went to their stations and completed three missions- one industrial, two trade.

These missions are basically guided versions of what one could do in that game anyway. For the industrial mission, i had to mine some Veldspar- so off i go, finding and shooting at asteroids. Then back, to complete the mission. The trading agent wanted me to deliver an item in the first mission, thereby training me in the art of moving things from item hangar to ship cargo and flying around. The second mission took me to salvage the black box from a ship that was attacked by space pirates. For this, you’ll need another type of “laser”- then, you’ll fly out to find the ship (it took me embarrassingly long to remember that you have to use the warp gate to get to your mission instance), kill a pirate ship (yay, i had a fight!) and then salvage the ruined ship.

Taking back the black box, what did the agent provide me with? Yes, that’s right- with a better mining ship that can take 20 times the ore than my current. Only, i can’t fly it yet.

Now, that was just one night- a bit more than two hours, of gameplay in fact. I started with an idea and it led me in circles. I researched and learned. I had much fun doing all that (as is evident in the word count here). CCP follows these ten days up with the offer of 30 days for 10€ – and i’m so taking that.