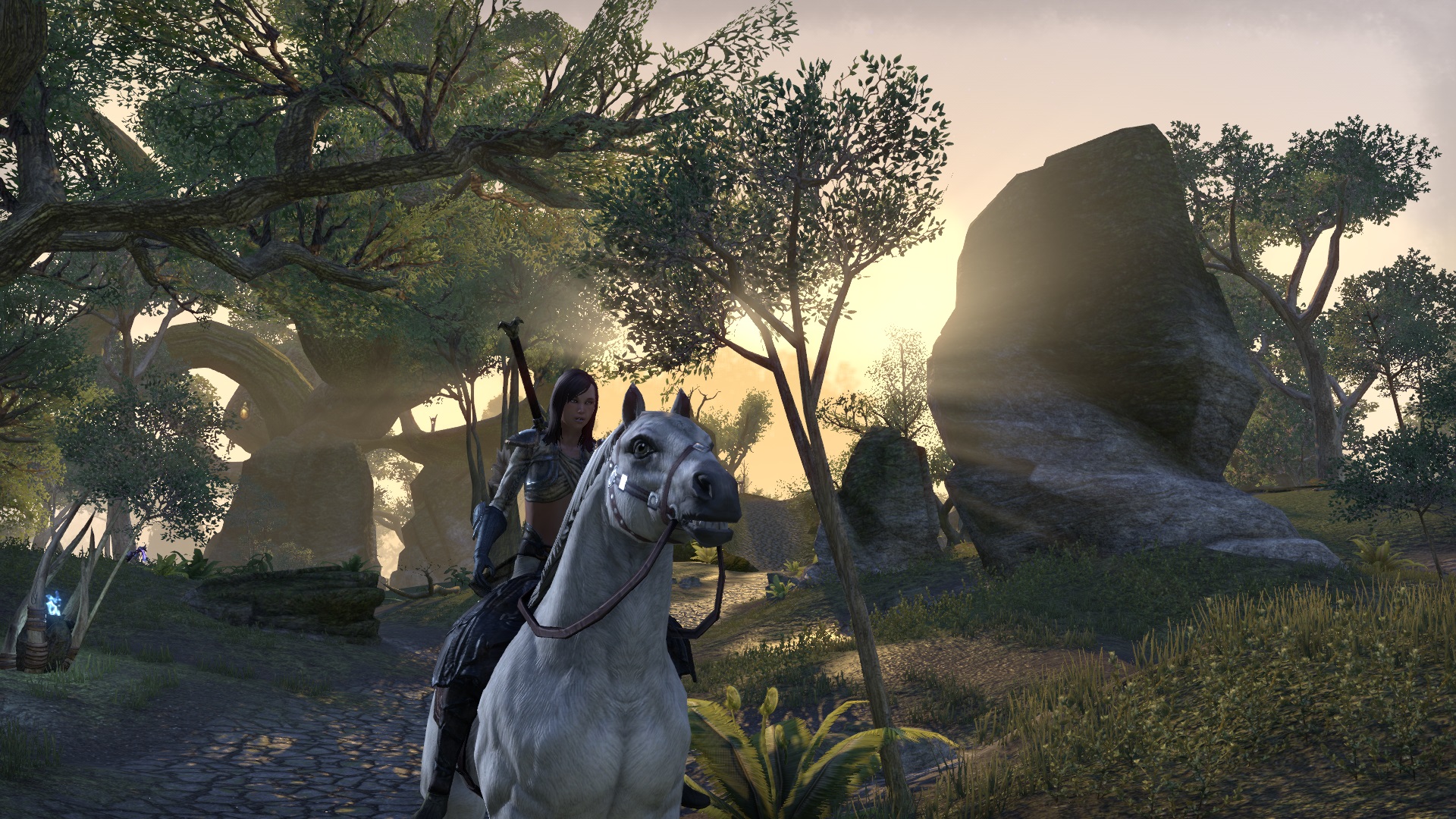 Last week saw me seriously returning to The Elder Scrolls Online in a normal manner- by that i mean questing through Greenshade instead of just doing random things on guild night. And it pulled me right back in with the expertly crafted questing experience. I’ve also made good progress taking Nuria from Level 28 to almost 32 in a week. The birthday cake helped, of course. I could have progressed even further if i would have played on friday night instead of having a guild meeting. The downside is that i’m outleveling Greenshade and maybe even Malabal Tor a bit, seeing that it starts with level 32 and i’m not done with Greenshade by any means. I guess i’ll be 35 by the time i’m ready to move on.

I still need to refocus on Nuria’s crafting abilities, though- she’s deconstructing items and researching traits all the time, but i don’t think she created armor or weaponry since…forever. Crafting in ESO is quite complex- my guess is that, to create something really useful, you would have to create the armor/weapon with a good trait and a good enchantment. Enchanting, however, is one frustrating craft to level, as you usually don’t find that third type of artifact. But i’ll look into doing more crafting with her soon.

Elder Scrolls Online really needs to add downleveling to zones as the game is quite easy by now, anyway, and being of a higher level than the quests you’re doing just adds to that. I continue to be very happy with the game, in fact, i feel it’s a rabbit hole i’m diving into deeper and deeper. Elder Scrolls Online is the first MMORPG since WoW where i want to add something external to my gameplay experience, ranging from podcasts, maybe even books and finally, i want to know more and have found a way to get what i want- the really great Lore series by Shoddycast i discovered via HeadBurro Antfarm. I’ve watched the first two episodes yesterday and learned a lot about Daedra and Aedra.

Speaking of crafting- EVE online was a surprise. It wasn’t on my radar at all when news began to heat up about World War Bee. I haven’t played since i wrote last, but i got the additional 30 days for 10€. As i’ve mentioned, for now, i’d like to do some trading, but my first shy steps into this area have been confusing. EVE’s economy is vast- with hundreds or thousands of different items to trade and thousands of places to trade them in. Even with using online resources, i had trouble finding out what and where to trade.

I feel like trade might be one of those things where knowledge of the game’s inherent systems might be a good thing. So i’ll continue to try and have trade as a primary focus (as you don’t need to know how stuff works to buy low and sell high- it’s simply more difficult to find out what to trade where), but will take sideway-looks into other areas like producing stuff (ships, maybe?) and maybe even combat via missions to get a better understanding of the game.

As is usually the case, i find EVE to be utterly impressive. One commenter on Massively Overpowered wrote that EVE is the one game where the devs took the concept of MMOs and ran with it. This is the game that has everything- if only it were a fantasy MMORPG, maybe with a bit more restrictive pvp (not much, though) and a company that doesn’t let their community loose on each others, this would be that game for me. BDO isn’t EVE in Tolkienland, though, so there’s still only EVE being EVE and i haven’t decided yet if my space travels will continue after those 30 days.

On friday, we had our monthly guild meeting. I wasn’t surprised to see poor attendance, with only three people turning up- including myself. On the other hand, i know one had something come up on short notice and one fell asleep (that happens to me from time to time, too), so we could have been five. Still, it’s this i’d like to change- and there’s only one way to do it, in my opinion: positivity. Create and share awesome experiences and our love for the game. Continue to offer stuff and make the guild be and feel alive.

So we talked a bit- i don’t want to get into too much detail, but in the end, this were the results:

That’s mostly it- well, i want to work on the homepage a bit to make it more attractive- the decision on whether to stay with Enjin or move on our own site has been postponed for now.

I’m also happy to say that we grew by one new recruit, bringing our ingame guild to 10 players. Ingame, we are reaching our critical mass now, with 5 of us playing quite regularly the chances that you’ll log in and find yourself the only one being online are slim now, the goal being about 10-15 active players. Yesterday evening, we were four…and i’m still expecting another application soon.

So, all in all, with patience, a focus on positivity and creating good experiences while sharing them in the forums/homepage, i am very confident that our guild will become active and alive some time this year.

3 thoughts on “Monday Quick Notes: ESO, EVE and the guild”