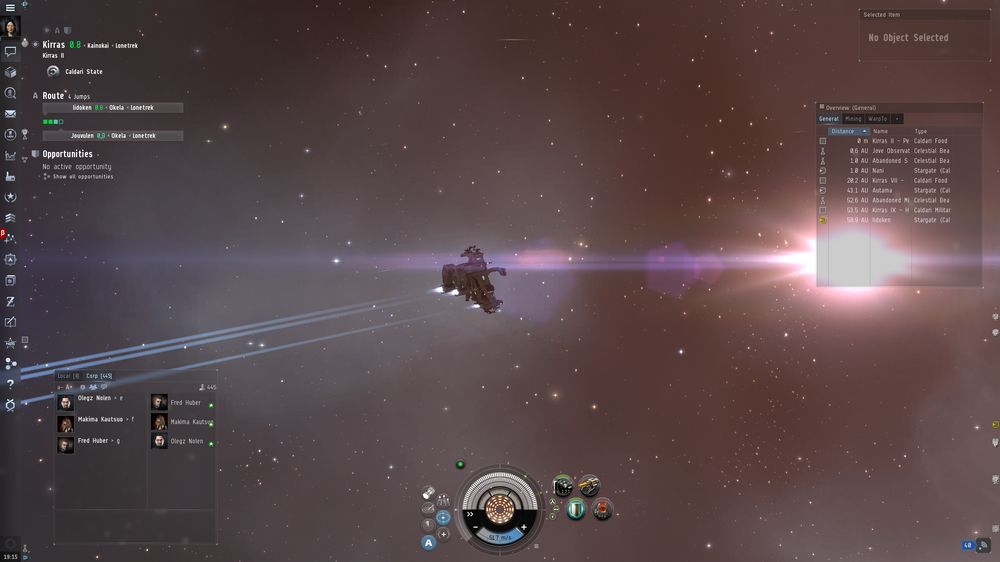 There are very few games out there where an experienced MMO player starts with being a true Noob. Black Desert Online might be one, but there’s still some familiarity left in terms of movement, basic ways to interact with the character’s inventory and so on. EVE is totally different in many ways. During my 10-days testing time, i’ve played two times now, and i can slowly at least begin to imagine the route i’ll take to take the first few steps.

The war is part of what brought me back- reading about it is hugely entertaining and it’s really exciting that a game makes something like this possible and complex, if you think about the logistics involved, the strategies, the fact that The Imperium basically sees this war as going on for years. But i don’t think i’ll have much to do with it, and that’s totally fine- if i’m ingame, i still feel like being a part of it, because of taking a part in the EVE economy and community.

There are, of course, newbie friendly corporations active in the war and i’m pretty sure it would be breathtaking to let one of them take me under their umbrella, teach me a little about what to do and get me started in a few days. And there is a slight possibility that i might take them up on that offer one day. The reason i’d like to stay away for now is that i don’t want to break the relaxing atmosphere i’m enjoying right now and i imagine things might get a bit tense if i were to join the war.

I also want to understand what i’m doing here- while surely not the same, jumping into the war now would feel like buying a maxlevel character in World of Warcraft and start to raid with a newbie friendly guild that still wants to beat content. Even if they told me what to do, i’d be in way over my head. And with EVE, it’s even worse. So if- and that’s a small possibility right now- i wanted to join some corporation, they’d have to be newbie-and-casual-friendly, easy-going, and sport a broad focus. I wouldn’t want to have ships or money, but some nice company to chat and maybe ask a few questions and/or do something in a fleet from time to time. Basically, a social corporation. Not small.

I know joining a corporation is one of the most-handed-out advice out there and it might become a topic for me if i stay with the game, but right now, i have my own goals.

I’d like to do some trading and hauling. That’s basically buying low and selling high. You can do it in one station easily- with a practice called “flipping” in other MMOs- where you place buy orders and turn the bought items around to sell orders. Hauling would be transporting goods from one place to the other to sell it with a profit.

The advantage of beginning with trading is that there isn’t much skill queueing involved. Sure, there are skills that help with trading, allowing the player to place more orders farther away with lower taxes and so on, but you can start trading the second your character is created. Or so they say.

Unfortunately, you’ll need ISK to get started- after all, you’d want to have some money to place buy orders, maybe ships that have a big enough cargo hold to transport what you’re buying and also some reserves to be able to recover from loss. So trading is my short-term goal, but it won’t be the first thing i do.

I’ll continue to take on missions- if i can’t find the tutorials, that is. The tutorials used to be in the help window and i’m pretty sure i haven’t finished all of them, but i can’t find them right now. If i can’t find them, i’ll take missions from all the agents in my current station. Each of them has ten, and there are a few agents offering missions for mining, industry, trade, combat, advanced combat, R&D and so on. So this will take me a while, but they offer good rewards- these missions run on a timer- if you complete them in a defined timeframe, you’ll get a bonus- usually more money, but sometimes equipment, as well. These timeframes are generous, at least for now- something like 3 hours when the mission takes about 10-20 minutes.

I own a mining frigate and i’m able to fly it! It’s cargo hold can take about 20 times the ore my previous ship could, so if i do the math it could take up to 1 million ISK worth of ore. That’s pocket change, really, but you have to start somewhere- and it is about 10% of what i have right now, so it still could be worthwhile. It might, however, turn out that gathering the ore takes very long. Still, sooner or later, i’ll be mining.

This is a mid- to longterm goal. When/if i have a basic understanding of the market, i want to create stuff. I don’t know if this is a profitable activity in highsec, but it is where i want to go in the end. I can’t tell you much about it right now, other than the last time i played, i made my own ammo.

As i’ve said, i’m enjoying this very much- i’m learning as i go and while EVE is an intense game it can also be very relaxing- i’ve played 5 hours this week and have blown up exactly the same amount of npc-ships. EVE is one of these games that, on paper, have everything i like. I went there a couple of times, was impressed each and every time, but somehow couldn’t connect. It’s too soon to place bets where this trial is going, but seeing that i have a plan and at least some type of route is good news. We’ll see in 35 days if i’ll continue.

For now, EVE will remain a tag on this blog- but i hope to change it into a category some time.

2 thoughts on “My plans for EVE”